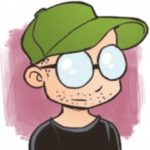 Figured it was worth starting a thread about. This situation gets weirder by the day.

Here's a recent video we did...

And apparently now he's been fired from RWBY...

This on top of being booted from a few cons like Emerald City Comic-Con.

Here's an apology video from Vic that was recently posted on Facebook...

Hey guys. Squally here. This is a clip from Today’s Q&A from Bak-Anime in Bakersfield, CA. LIKE and SHARE to show Vic...

EDIT: It's been removed??

This is a tough one. Behind the scenes I've gotten a TON of DMs and emails from people who have worked with Vic, both for and against him.

Personally I think it will be used as a blunt instrument to chip away at the anime community, regardless of whether or not he's actually guilty.

I still follow the ol mantra of "innocence until proven guilty" I will not be roped up by this weird witch hunt without any proof that he did. and no I will not listen and believe plus most important of all twitter is not the motherfucking police department

There's a ton of circumstantial evidence (and a bit of actual evidence) suggesting that a lot of the photos showing Vic committing the crime were photo shopped, and they found a IM group actively conspiring against Vic, including several prominent voice actors.  This includes Monica Rial who's now actively threatening people with legal action for anyone who even hints that they are curious about proof.