First up, let’s take a look at a few of the big surprises. We showcase all of them in this video:

Cuphead is a relatively new game, but the notoriously difficult platformer has already become a cult classic. Funko is releasing a series of Mystery Minis from the game in 2018. Hot Topic has some exclusives like a new version of Mugman, Grim Matchstick and

At Gamestop, the exclusives are Beppi the Clown, Chauncy Chantency and Cuphead in airplane.

Miraculous Ladybug is a huge hit, and its great to see Pop Vinyl versions of Cat Noir with Plagg, Ladybug with Tikki and Hawk Moth. Another big surprise is the Garbage Pail Kids. These 80s mainstays have recently made a comeback, and it’s great to see Pop Vinyl versions of the Garbage Pail Kids them planned for 2018. The first assortment features fan favorites Clark Can’t, Beastly Boyd,Ghastly Ashley, and Adam Bomb. Speaking of the 1980s, get ready to do the Care Bear stare with new Care Bears Pop Vinyls. Classic bears included in this assortment are Tenderheart Bear, Cheer Bear, Funshine Bear, Love-a-Lot Bear, Good Luck Bear and of course, Grumpy Bear. Chase variants include glow-in-the-dark versions. Exclusives include Bedtime Bear with a nightcap, a flocked Grumpy Bear and a glowing Love-a-Lot Bear. The 80s nostalgia can’t be stopped. He-Man and the Masters of the Universe Pint Size Heroes were revealed at Toy Fair. Heroic Warriors are represented by He-Man, Battle Cat, Teela, Man-At-Arms, Moss Man, the Sorceress and Orko! Skeletor’s pint sized Evil Warriors include Panthor, Beast Man, Trap Jaw, and Mer-Man! And there will be exclusive figures of Faker, Evil-Lyn and Stratos at FYE. Funko is all about the anime this year. Sailor Moon returns in a series of Mystery Minis. The assortment includes all ten Sailor Senshi as well as Luna and Artemis. Exclusives at Hot Topic include Super Sailor Moon, Diana and a new Chibi Moon. While at Gamestop, look for exclusives of Sailor Pluto, Mistress 9 and a new Sailor Venus. Ouran High School Host Club finally gets the Pop Vinyl treatment. Haruhi, Tamaki, and Kyoya will be coming your way in 2018. Games, games, games… Funko is all about the video game IPs this year. In addition to the previously mentioned Cuphead, Five Nights at Freddy’s is getting a huge new assortment of Mystery Minis and Pop Vinyls. New FNAF Pop Vinyls for 2018 include Twisted Ones versions of Freddy, Foxy, Bonnie, Wolf, Chica and Theodore. Exclusives include Stanley, Ella and the Marionette.

Destiny 2 gets a new wave of Pop Vinyl figures that includes Dominus Ghaul, Suraya Hawthorne with Hawk, Amanda Holliday and the old Warlock Osiris. Exclusives include Cayde 6 and Emperor Calus.

HALO gets a new series of Pop Vinyls as well, and the 2018 assortment includes includes Master Chief with Cortana, Sgt. Johnson, ODST Buck, and the Arbiter.

Let’s not forget about movies and TV! New Marvel Pop Vinyls include Gwenom, as well as other Funko figures from Thor Ragnarok including Gladiator Hulk, Hela and Valkyrie.

Lastly, Rick and Morty is coming in Dorbz form. The initial assortment includes Rick, Morty, Mr. Meeseeks, Snowball, Squanchy and Beth. A flocked Snowball can be found at Gamestop, and Tinkles is available exclusively at Hot Topic. A second wave of Rick and Morty plushies are also on their way from Funko.  It includes fan favorites Toxic Rick, Toxic Morty, Scary Terry, Krombopulos Michael, Snowball and Squanchy.

While 18″ plushies of Pickle Rick and Pickle Rick in Rat Suit are on the way, only concept art was available at the time of the announcement.

Rick and Morty Pop! Pens are coming back for a second series. And that does it for this episode. Clearly, a lot of Funko Pop Vinyl fans are going to be hemorrhaging some serious cash this year as the offerings look pretty cool. 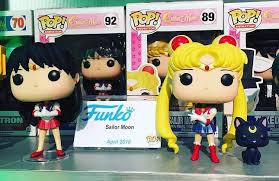