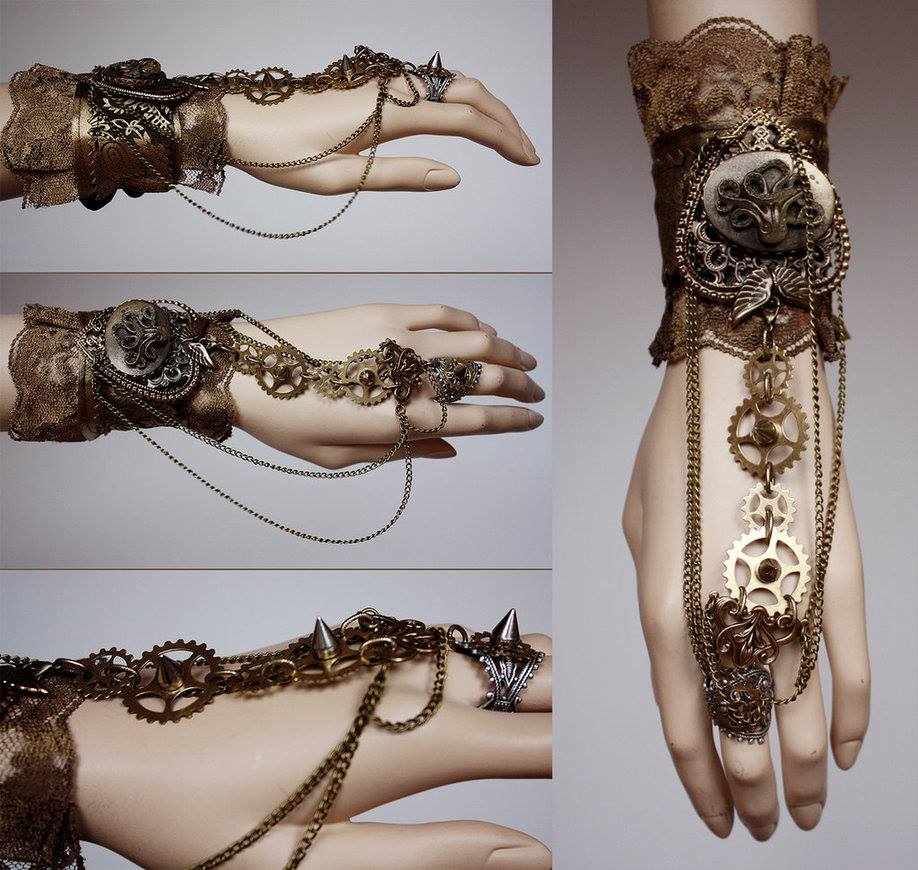 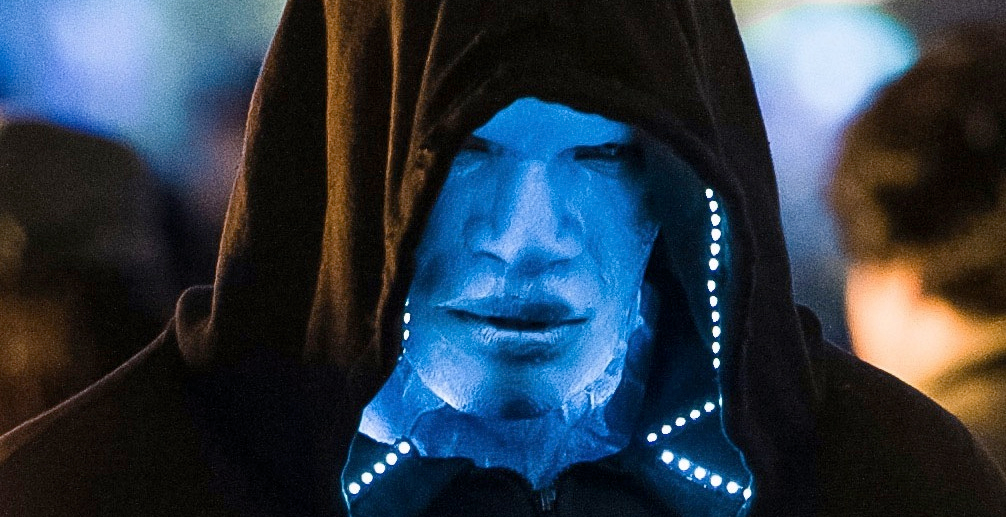 Looks like they let the cat out of the bag a little early out there in San Diego. Here’s our first real glimpse at Jamie Foxx as Electro in Amazing Spider-Man 2…

Being a fan of all things Disney, I’ve been pretty excited by the prospect of seeing the behind-the-scenes drama surrounding Disney’s classic, Mary Poppins. The film looks promising, even if it’s hard to look at Tom-Hanks-with-a-mustache and think “Walt Disney.”

The first trailer has appeared online, and you can check it out below: 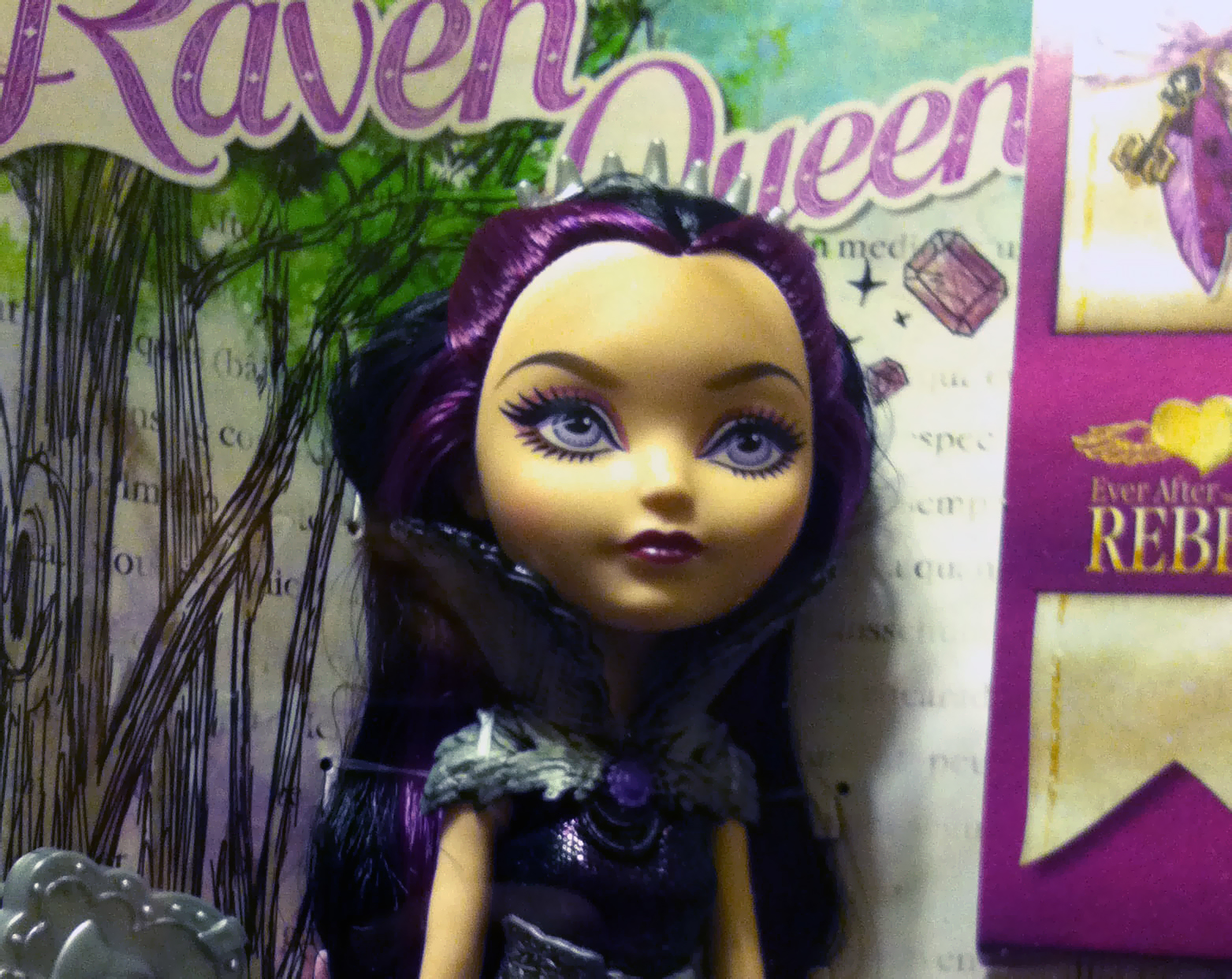 Last Wednesday we stopped at the Justice store (my daughter loves their clothes) and picked up two Ever After High dolls: Raven Queen and Madeline Hatter.

There are four dolls released so far:

Apparently we’re Rebels here at Shadowbinders, because we chose the two Rebel dolls.

The boxes on these dolls are beautiful. The artwork is well done and they boxes are made resemble a story book. Instead of a journal, like the Monster High dolls, the Ever After High doll’s information is on the back of the box.

The back of the boxes also say “Are you a Royal or a Rebel? Shut the storybooks you thought you knew and open a new chapter at Ever After High, where the spellbinding teenagers of classic fairytale legends choose to either follow their parent’s fabled footsteps or discover their own Happily Ever After.”

If you’ve watched any of the videos on the site Raven Queen does not want to be evil and follow her mother’s lead. This is creating an issue for Apple White, who wants her to become the evil queen to her Snow White story.

I put Raven Queen next to a Monster High Abby Bominable and compared them:

These dolls are from Mattel, the makers of the Monster High line. I was expecting them to be very similar, but right away I noticed they were similarities, but they are also very different. The Ever After High dolls have larger heads and are thicker over all. I do like this, as the Monster High dolls tend to be a bit fragile in appearance and for play.

I also liked how the doll stand is between the back of the box and the cardboard behind the doll. It keeps it out of the way for those who want to display the dolls in the box and don’t want the stand in the way.

Another thing to note. In the upper right hand corner is a rectangular piece that says “Rebel” or “Royal.” This is actually a bookmark and attached to it is a story that comes with the dolls. You don’t want to throw this away.

Looking over the Madeline Hatter doll…

I love this doll. She has a more victorian / steampunk look to her. Her shoes look like teacups and her purse is a tea pot. Her hair is very cool with the aqua and purple curls with teapot hat. This is why we chose her as our giveaway doll.

Overall these dolls are very cute. Personally, I still prefer the look of the Monster High dolls to the larger heads of the Ever After High dolls. But my daughter loves them just as much as her beloved Monster Highs. I’m interested in seeing all the other dolls that will come out and all the new mini episodes of the show. 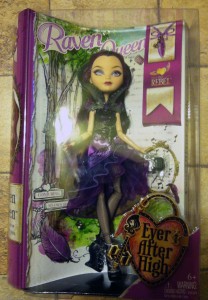 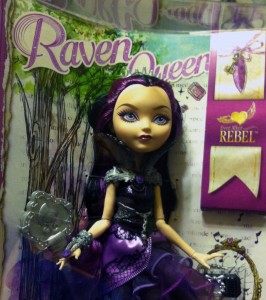 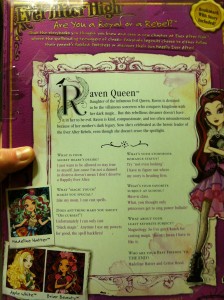 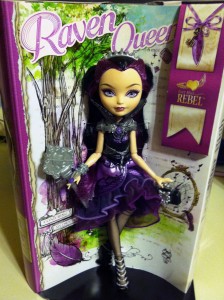 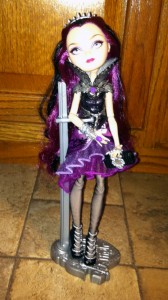 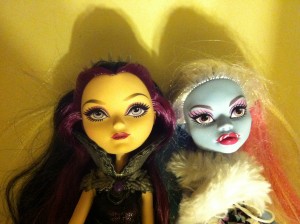 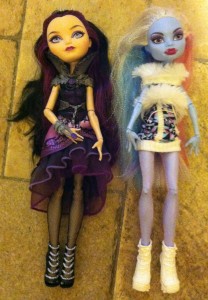